Vanguard: Normandy 1944 is a CRYENGINE-powered tactical WW2 FPS which is coming to Early Access on Steam later this year, with a Kickstarter campaign live now. Check out our interview with Tom Dudley from Pathfinder Games to find out more about their intense multiplayer squad shooter.

Vanguard: Normandy 1944 features authentic real-world battlefields which will immerse players in the intensity of close-quarters infantry combat, where teamwork and tactics are vital to success. We spoke to Tom Dudley from developer Pathfinder Games to discover the design philosophy behind the game, find out how historians have helped the dev team, and learn why they chose CRYENGINE to achieve their vision. 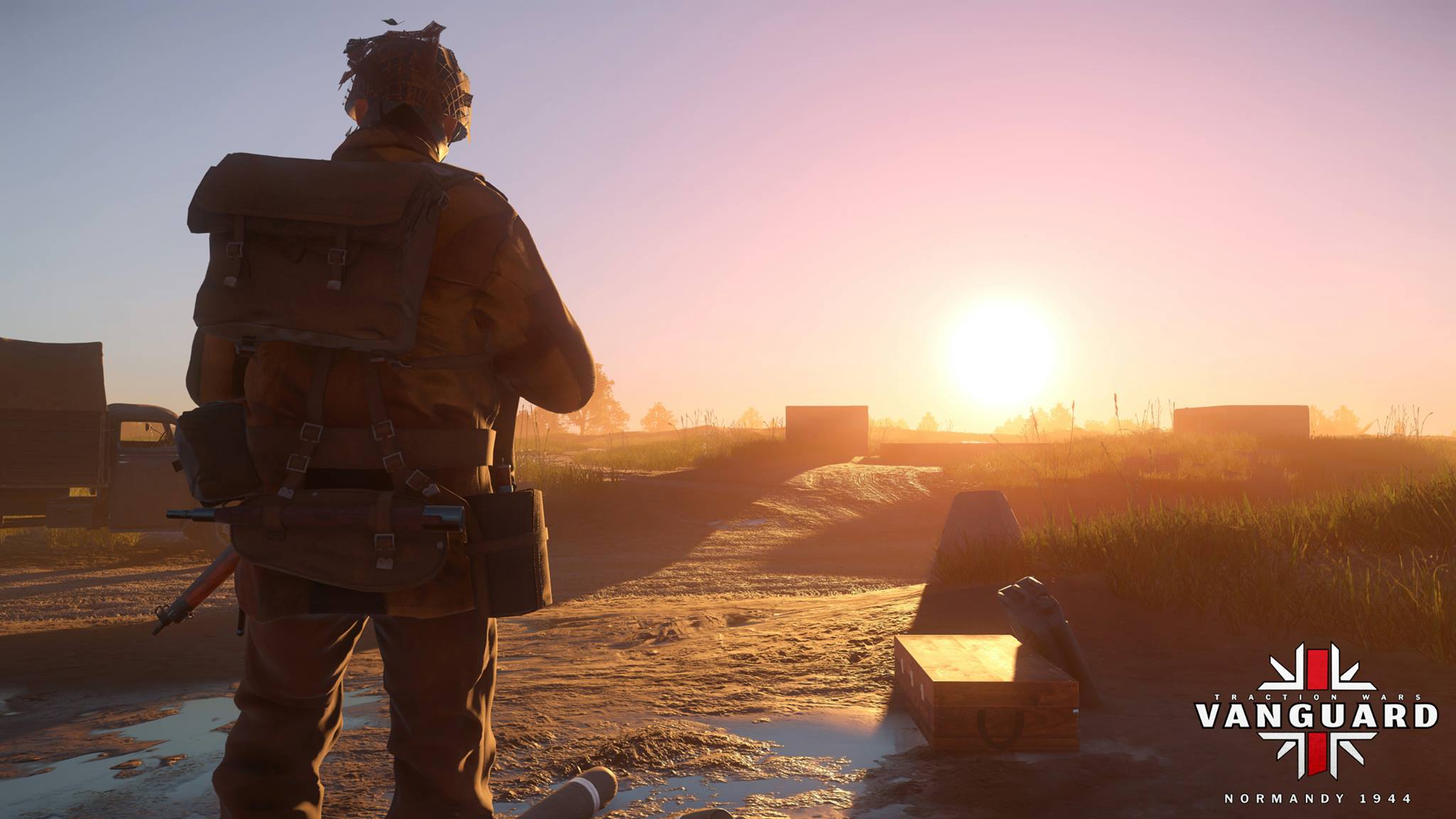 Hey Tom! How does Vanguard: Normandy 1944 stand out from other games in the WW2 genre?

Vanguard is all about creating an authentic experience which honors rather than glorifies the events of the Second World War, and authentically recreates the battlefields of Normandy for players to experience the intensity of the battles fought there almost 75 years ago. From the early days of the project we have had historians onboard to keep an eye on the historical accuracy and authenticity of the game.

We really wanted to create a game where squads have the freedom to take an objective how they see fit, but to also hone in on the intense, infantry combat of these historical operations. There are plenty of large-scale games available, but by catering for intense small-scale infantry-only scenarios makes for some really interesting tactics in each round. As other WW2 multiplayer games try to outdo each other in bringing larger and larger player counts, we have focused on what’s fun for the players in delivering that slice of hectic infantry combat. For example, in our first game mode, Raid, attackers must capture each objective from the defenders before the time runs out, but every life matters and survival is critical to the success of your team.

We’ve had historians involved since the beginning of the project, advising on everything from the factions and locations to the weapons and uniforms. We wanted to recreate the Normandy battlefields as closely as possible so players can experience some of the same challenges that were faced during D-Day. Aerial photographs and maps, museum visits, and replica equipment have all been used throughout the development in order to recreate the historical accuracy that we wanted to portray. CRYENGINE itself has a big part to play in that vision as well, allowing every detail to look as good as it can. 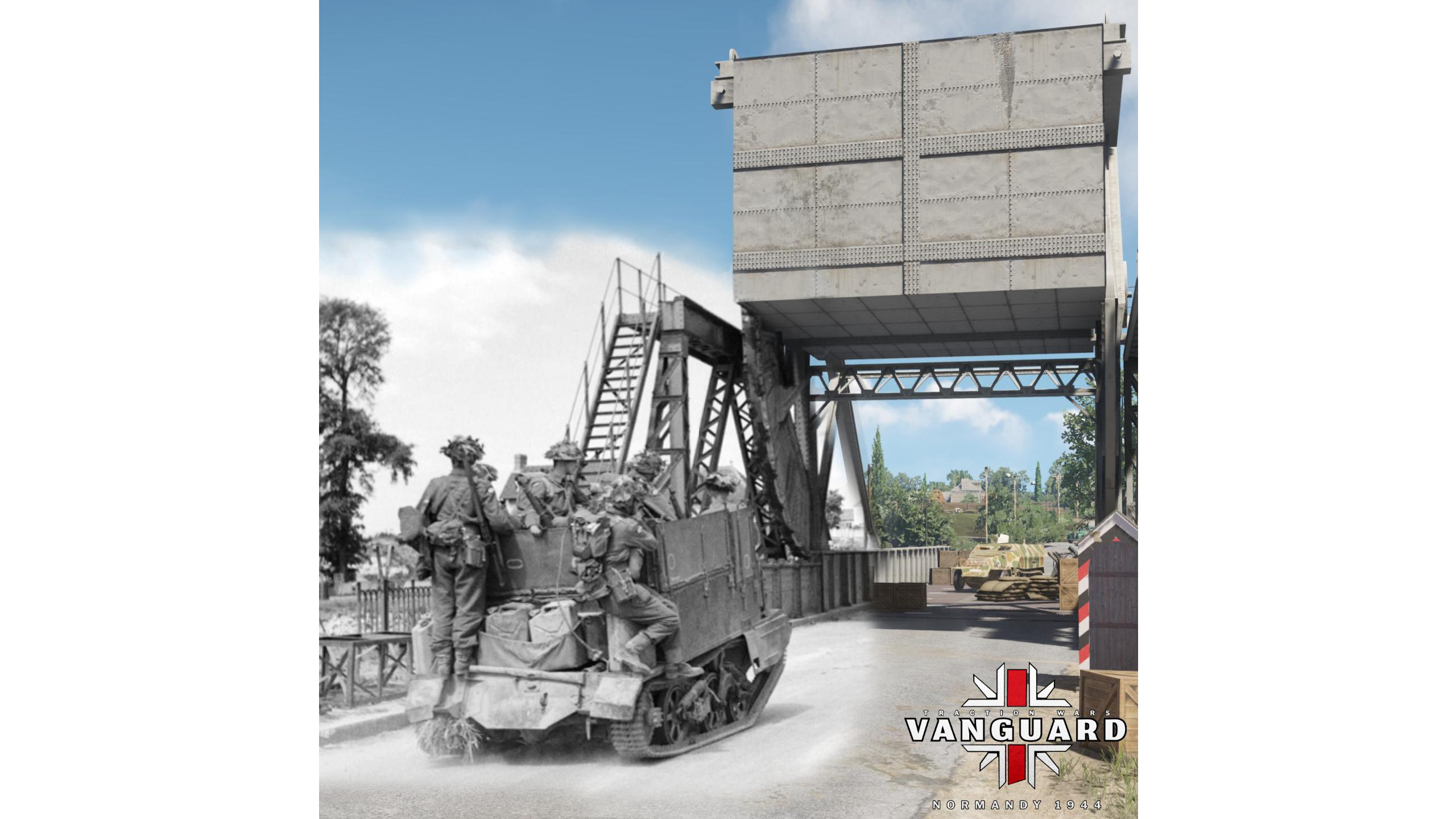 Can you tell us about the team behind the game and how you came together?

We are Pathfinder Games. In the beginning we came together through our shared passion for WW2 history and the desire to create a game which gave an authentic, tactical, teamwork-based multiplayer experience which was accessible and more intense than other games already out there.

The team has matured over time as our experience and skills developed, and it has become a huge part of our lives. Over the last couple of years the game has been completely rebuilt with CRYENGINE 5, and the end result is Vanguard: Normandy 1944 which we are incredibly proud to finally show off to the public. 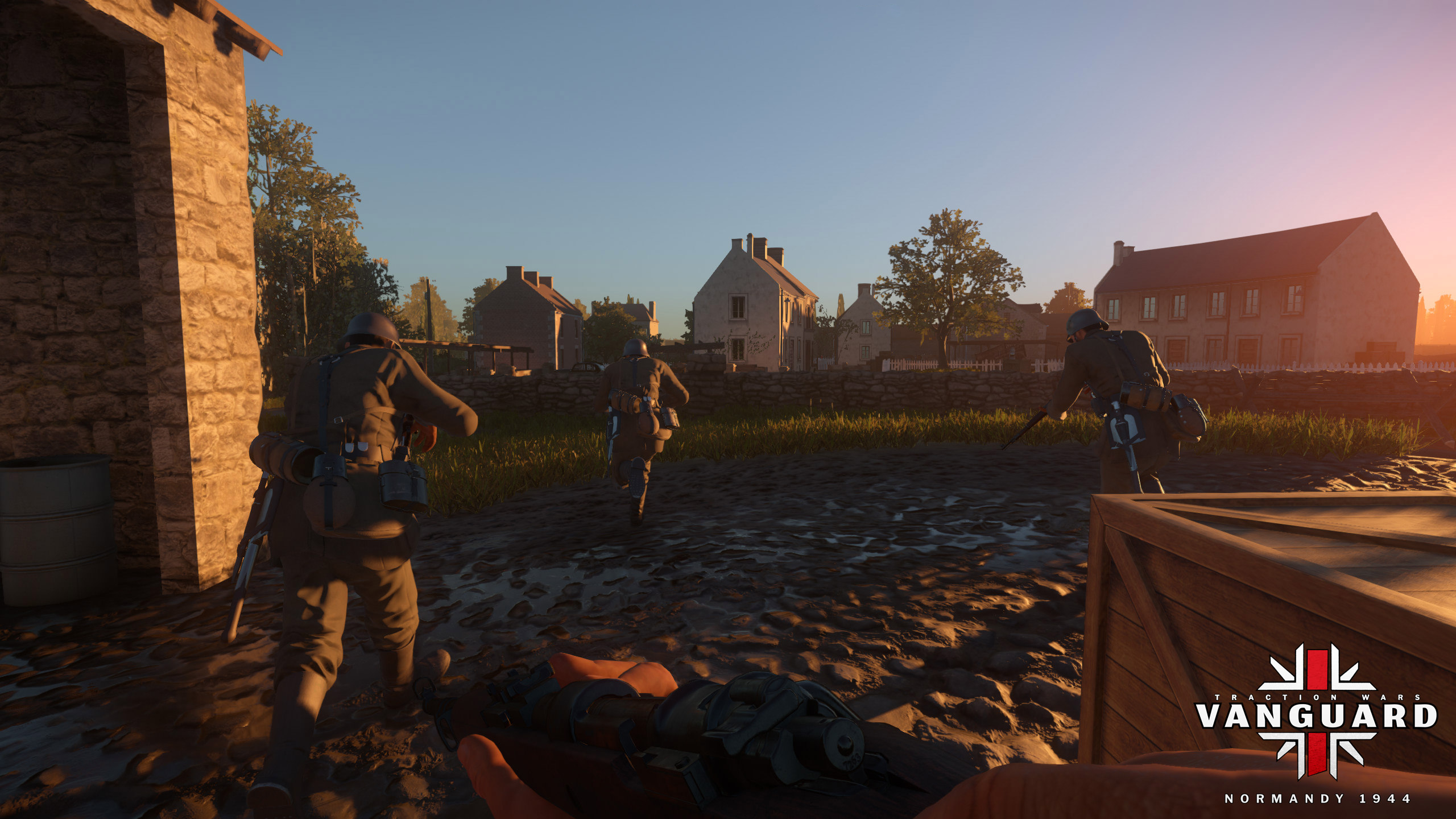 Why did the team choose to go down a more hardcore approach for the gameplay?

Vanguard offers an authentic infantry combat experience where a single bullet can end your life. Knowing that just one careless mistake can cost you and your team dearly creates an intense and exciting experience. Each kill requires skill and aim which only adds to the satisfaction. We have created something different from both the run-and-gun arcade shooters and the huge combat simulators because it’s something we wanted to play ourselves.

The gameplay is hardcore but we don’t want players to have to spend a long time finding the action. Players will find themselves thrown into frequent skirmishes with the enemy. 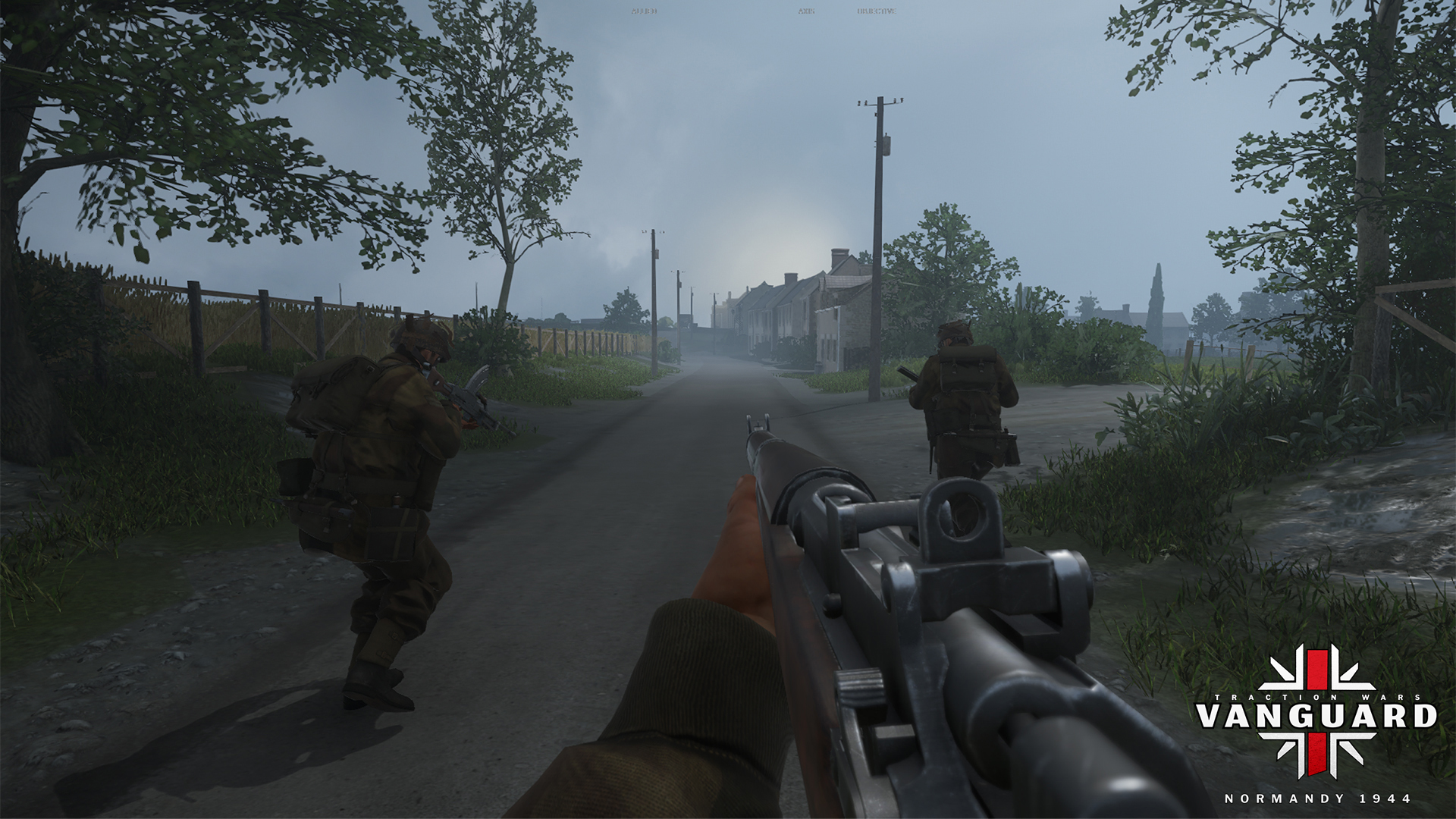 Why did you choose CRYENGINE to develop Vanguard?

We have been working with the engine since CRYENGINE 2 and each subsequent version has brought new technology, performance improvements, and new ways to dazzle which were previously impossible. But the very first thing which made CRYENGINE stand out for us was the photorealism, something that Crytek has been the leader in for well over 10 years, and continues to this day.

Authenticity and historical accuracy have always been important themes for the team. We wanted players to become lost in the beauty of the French countryside and terrorized by the intensity of battle. CRYENGINE gave us the tools to do both without having to rely on expensive plugins or deep customization of the engine. 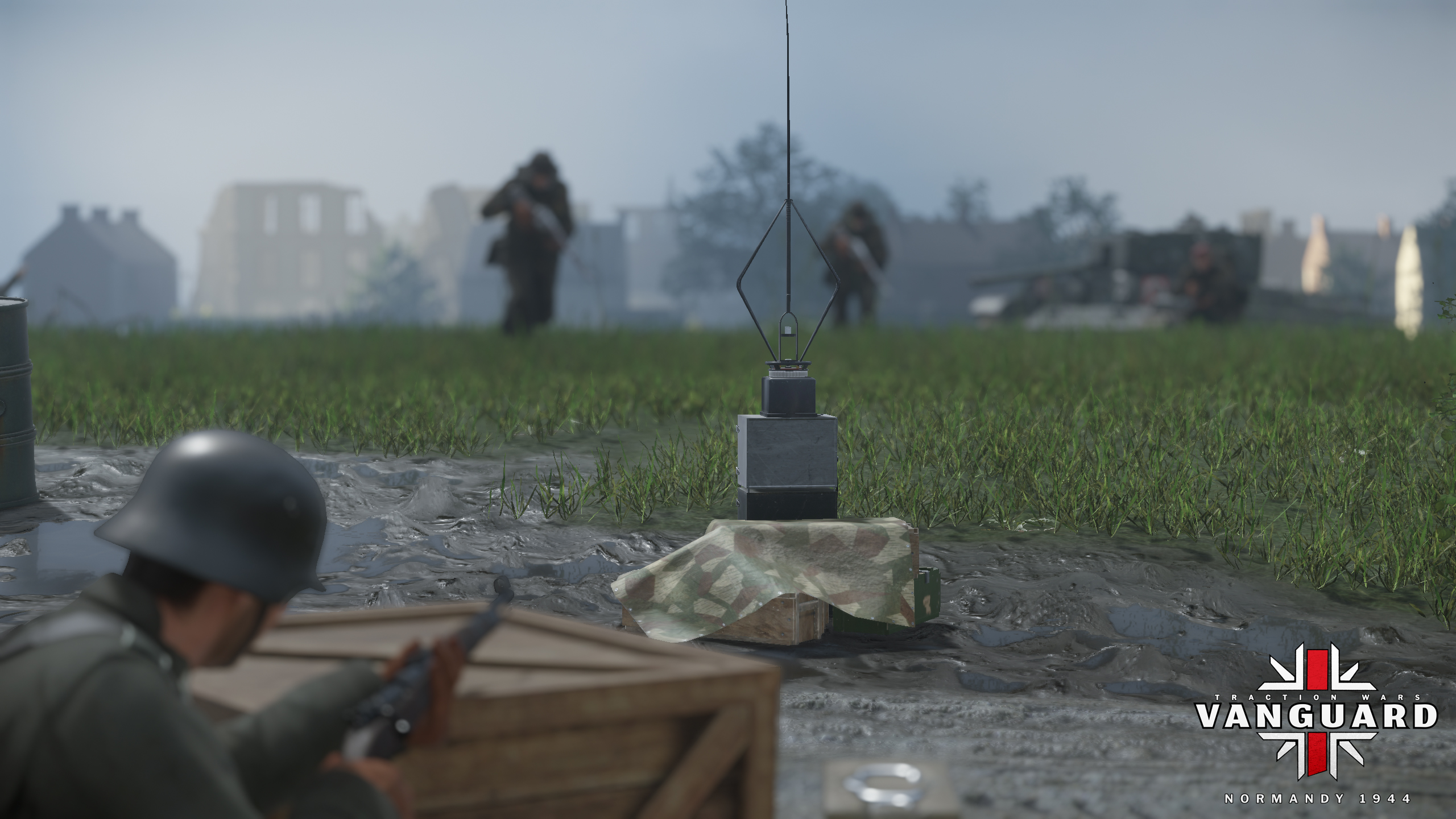 It’s hard to describe how CRYENGINE features have made a difference to our development. Many of them, such as the simple interface and WYSIWYG editor, are so central to our development that we take them for granted. Seemingly little things like the ability to change the lighting on-the-fly or more obvious features such as being able to easily implement our chosen audio middleware via the Audio Translation Layer all save time in development and make life easier for us as developers.

Having used other level editors our Level Designer is a big fan of how quickly, easily and efficiently it is to build large levels in the CRYENGINE Sandbox. Whether it's through quickly whiteboxing within the editor itself, generating and modifying terrain, or creating complex building structures using the Prefab system, you cannot beat the holistic toolset that is provided with CRYENGINE.

We have made good use of both the community forum and CRYENGINE Answers. The community has always been helpful in sharing the challenges they have faced and their solutions.

The game was previously known as Traction Wars. Why the change to Vanguard?

Traction Wars has a lot of history for us and it was a tough decision, but overall the benefits to shifting to a new name which better reflects the evolved vision for the project outweighed the downsides. We haven’t forgotten our roots though and you can still find the name Traction Wars in the logo.

Vanguard provides more appropriate branding that has a wider appeal. As much as we liked the previous name it didn’t scream ‘WW2 infantry shooter’ and the shift to Vanguard means we are able to better explain our game to the public.

We also believe the new branding allows our existing community to see that we are taking the project seriously and, despite a long development period, are near to the release of the game.

Ultimately, we decided that choosing a new name would help us appeal to a wider audience and help the game be more successful. Linguistically, it makes more sense too!

What are the next steps for the Vanguard?

We are scheduled to release Vanguard onto Steam Early Access later this year, but right now we are focused on our Kickstarter campaign which will help pay third-party license fees and for the all-important dedicated servers. If we hit our stretch goals we will also be extending the game during Early Access to bring in new weapons, factions, maps and features.

We have done everything to date in our spare time using personal savings to pay for everything. We are now on the cusp of releasing the game and we are asking for the community’s support to help launch the game and make it a success.

You can get all the latest news about Vanguard: Normandy 1944 at its website, and check out the Kickstarter campaign which is live now! 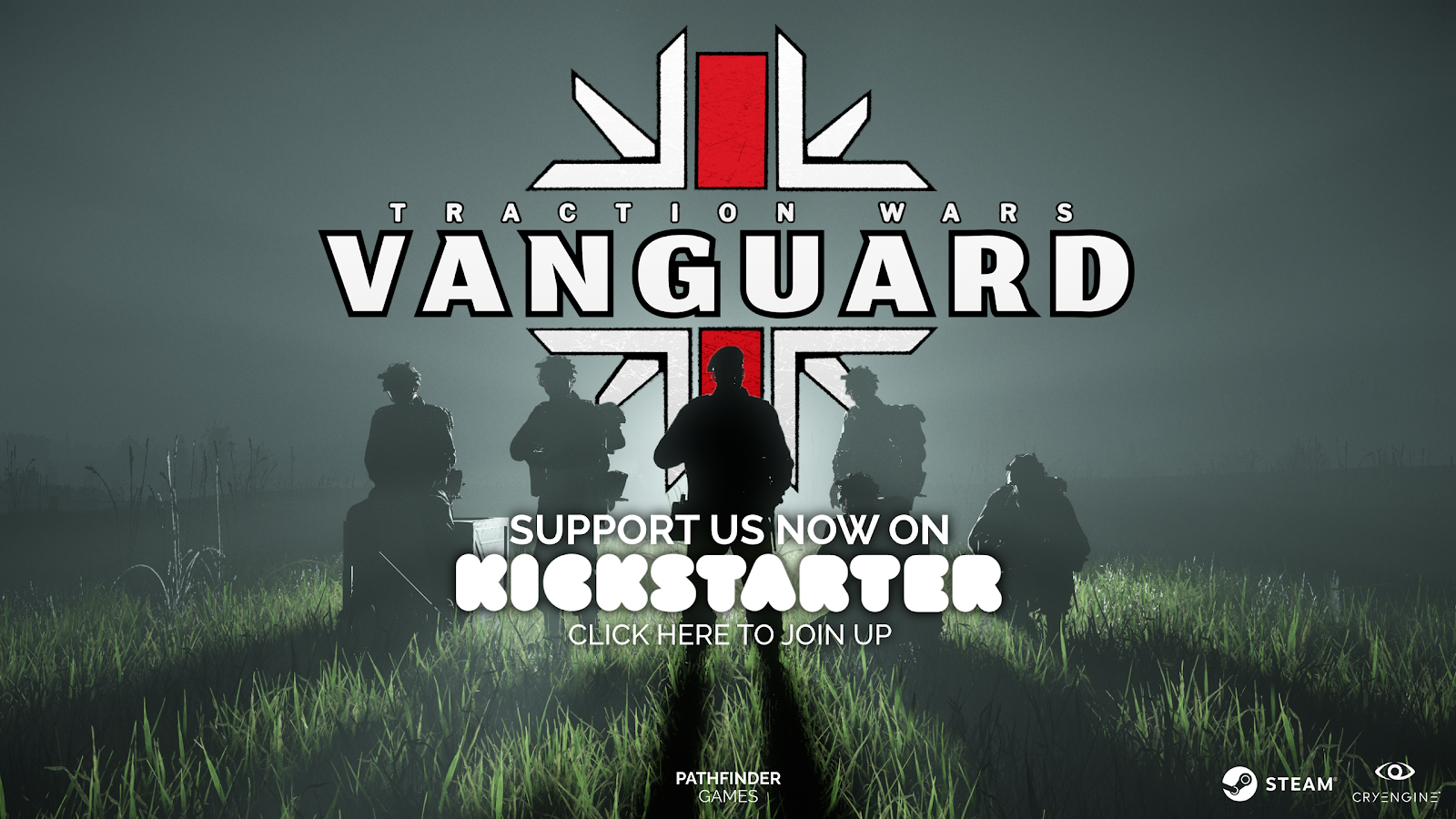 If you’re inspired to create your own take on a WW2 game, why not check out CRYENGINE Marketplace, where there are a range of excellent historical assets that can accelerate your development?

As ever, we look forward to your feedback in the comments, on the CRYENGINE.com forum & Discord or via Facebook, and Twitter.

FPS of course, what else to expect from CryEngine.

Reply
View all
More like this
Crytek announces Crysis Remastered
Crytek to release a remaster of Crysis 1 for PC, Xbox One, PlayStation 4, and Nintendo Switch this summer.
April 17, 2020
25
The wait is over.
News on one of the community’s most requested announcements.
April 16, 2020
27
Let’s shine a light on: Wolcen: Lords of Mayhem
Our team played Wolcen: Lords of Mayhem. Here’s why they think you should too.
April 11, 2020
9
Privacy preferences