In our CRYENGINE Forge feature, we show you cool things that we've done with CRYENGINE internally. “Can it run Crysis?” is the legendary question that gamers have been asking of their hardware for years. For VR, there will soon be a new question: “can it run Sky Harbor?”

Sky Harbor is the beautiful award-winning VR experience from Crytek which is set to be released by Basemark to verify that users’ hardware can run a comfortable VR experience. We spoke to Erasmus Brosdau, Creative Director on the project, about how it came to life.

So, how did Sky Harbor come about?

Basemark wanted to make a VR benchmark. As a benchmark is mostly about graphics, understandably they decided to talk to Crytek. They were looking for a theme or a project they could use, and they saw some concepts, sketches, and 3D models I had been working on as an exploratory project. They saw my stuff, and thought why not make something with this? So we did!

What were the challenges in bringing the experience together?

The biggest challenge is in telling a story in VR with almost no interactivity. It’s completely linear. Now, that’s fine in traditional cinema, for example. But in VR, you give control of the camera over to the user. On the one hand you want the player to look around everywhere at all the cool stuff, but on the other hand you don’t, because you want them to look at the things that are important for understanding the story. So I had to find multiple ways for how to control the viewer’s head movement without them noticing it. But the world has to hold up even if they are not following the action. That meant we had to ensure that there was something going on everywhere. Animations can’t stop mid-air because we think that nobody is looking in that direction. You can’t break the immersion. Were there any other differences to the way you’d normally go about telling a linear story?

One interesting thing we discovered as we put Sky Harbor together was that we had to change establishing shots. Normally, these shots are short, maybe around three seconds long. In VR, I quickly noticed that you had to make them way longer, because you have to experience 360 degrees of your surroundings.  You put the user in a fantasy environment of a kind which they almost certainly haven’t seen before, so they are curious and really want to look around. That affects the pacing of the story you want to tell, satisfying that innate curiosity that comes when you’re in VR. What is your favorite thing about Sky Harbor in VR?

There are a couple of moments I think are really cool. When the evil sky harbor – by the way, it doesn’t have a name, we just called it the evil sky harbor - comes down to you and breaks apart into two pieces it’s pretty amazing because this is where VR really pays off. You really feel the scale. In a movie you might include elements to make it feel large, so you might place different airships around it and each gets smaller and smaller. That’s the usual visual trick.  But in VR you really don’t need this because you are seeing it with two eyes, and you can actually see the scale. And everything we build is a kind of “real scale.”  So the evil sky harbor was really like 600 meters long. And your eyes instantly recognize this. It just looks massive. Even when we made the first version, a very cheap grade clay model with no textures, just a basic model it looked massive. It was really impressive. This wouldn’t be possible in a traditional movie. Another favorite moment is the stone giant that rises. It’s a similar effect. He looks massive just by standing there. And it’s so cool that it just works. You don’t have to do anything. You just place a model there, and it looks massive already. VR really makes the difference.

Stay tuned for the release of Sky Harbor. As always, we’d love to hear from you on Facebook, Twitter and the official forums.

Want to contribute to the development of CRYENGINE? Find out how here. 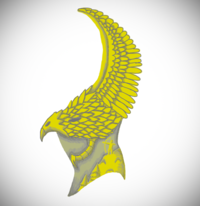 Sad that Erasmus left Crytek... I hope Crytek allows him to continue work with cinebox on "The Lord Inquisitor".

Reply
View all
More like this
Meet the Team: Alin Alexa, Technical Support Engineer
Today we’re speaking with Alin Alexa, who was recruited from our community to join the CRYENGINE team!
March 03, 2020
CRYENGINE Razer Chroma RGB Integration reveal
See in action how we integrated RGB lighting system with Neon Noir in our latest video featuring commentary from our CryEngineers.
February 26, 2020
Bringing The Climb to Oculus Quest
Find out how we brought The Climb to Oculus Quest in our development roundtable.
February 10, 2020
Privacy preferences