Racing Glider is a one-man-band developed futuristic racer in Early Access on Steam right now, and you can find out how CRYENGINE made the difference for this beautiful looking game in today’s Community Spotlight.

CryEngineer Merunes is well known in the community as the developer behind the excellent Rolling Sun, which is available as part of the Humble CRYENGINE Bundle 2018 alongside an amazing array of CRYENGINE assets, tutorials, and games. We spoke to Merunes about his current project, Racing Glider, which is an amazing example of what just one person can achieve with CRYENGINE. 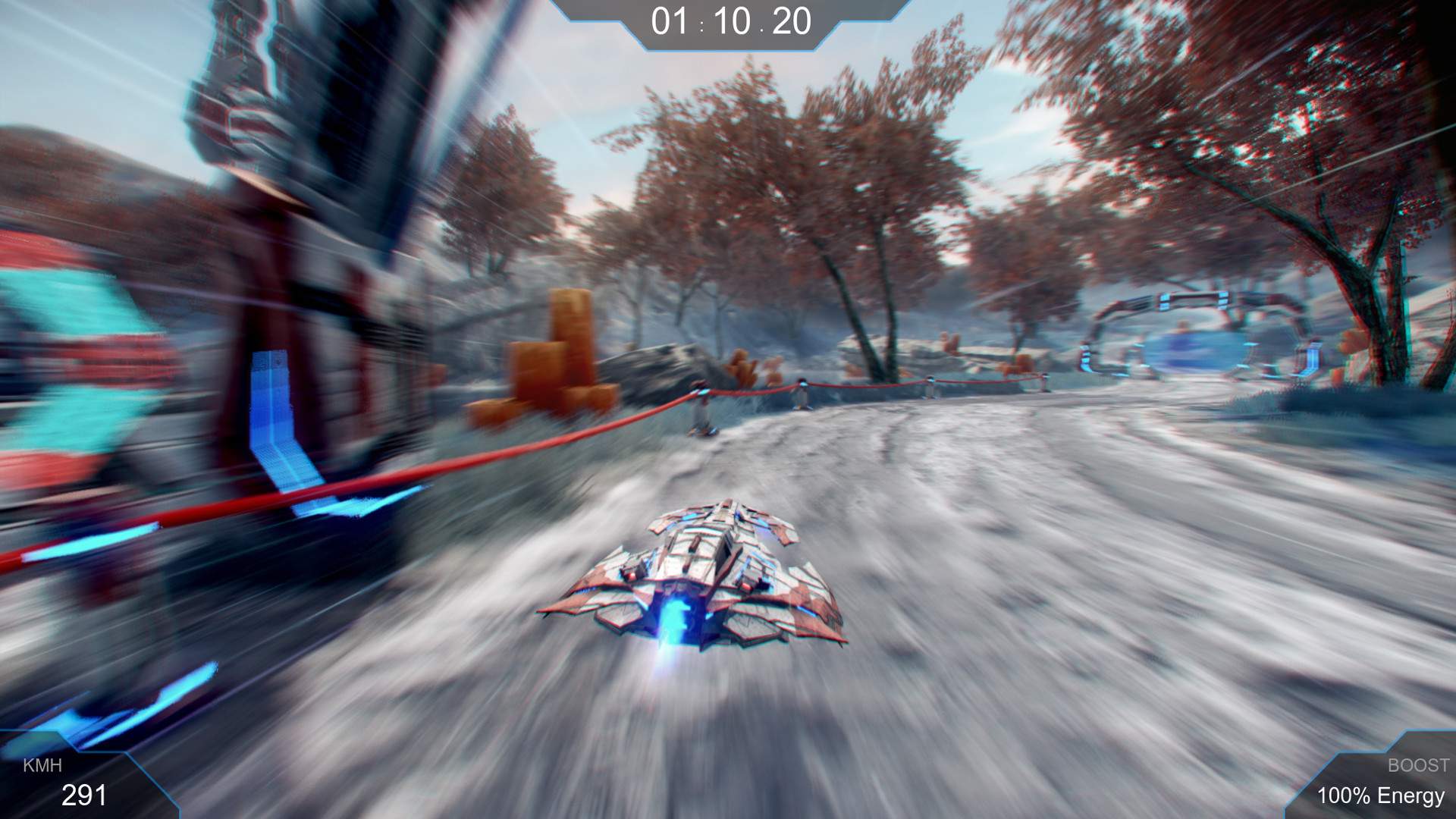 Hi Merunes! Thanks for joining us. Can you tell us about Racing Glider for people who haven’t heard of the game?

With Racing Glider I wanted to reinvent the old classics of futuristic racing games by offering rally type circuits in natural and fantastic environments, combined with physics-based gameplay. You will need to master the inertia, speed, and physics of each vehicle to beat the times set and grab all those medals.

Where did the inspiration for Racing Glider come from?

I was influenced largely by the universe of Star Wars and the famous pod racers. Naturally, the old classics of the genre such as Wipeout and F-Zero also left their mark on me when I was younger. This is probably why I decided to bring my vision to this type of game. I wanted to bring the concept of off-road driving with futuristic vehicles with their own physics. 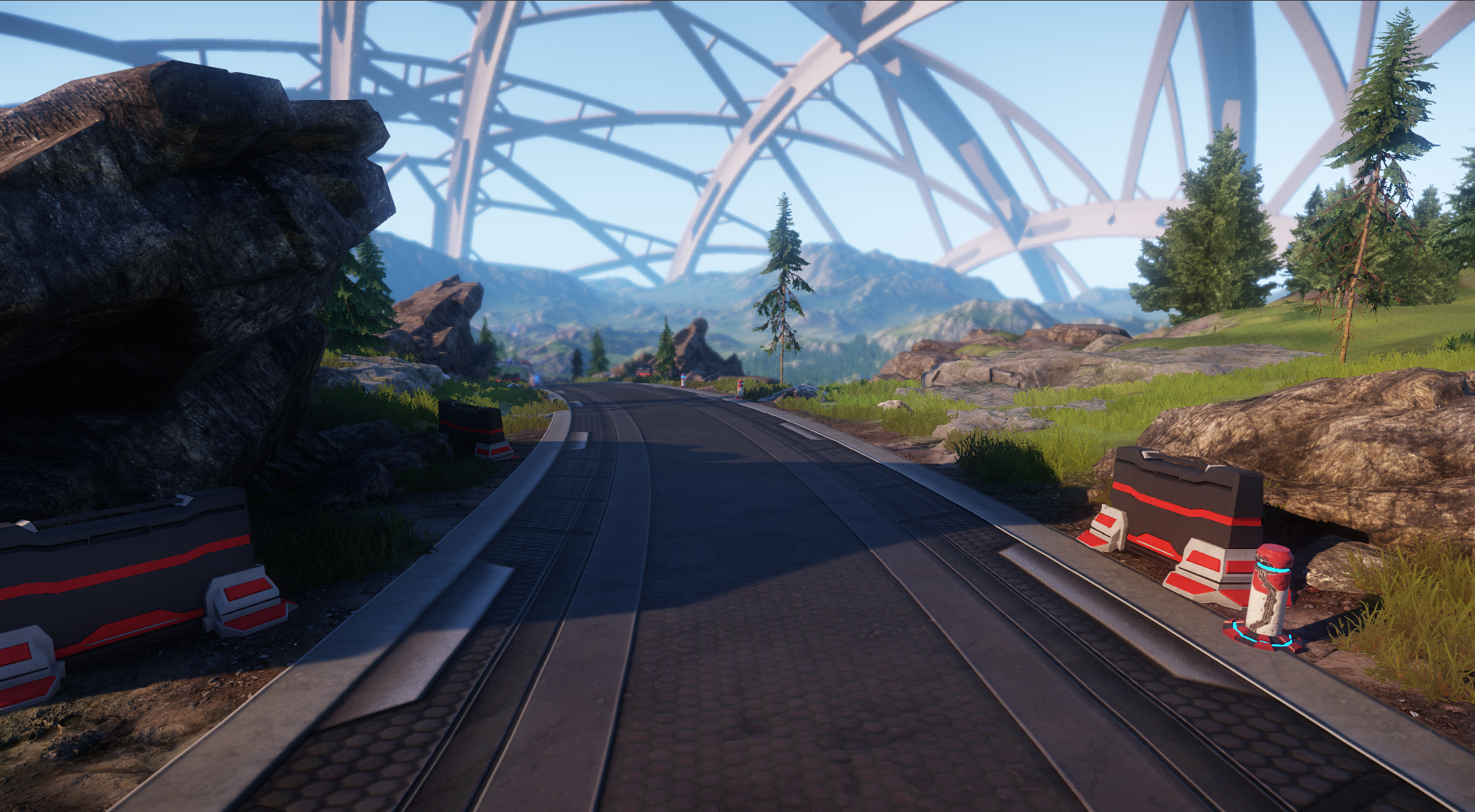 What’s your favorite moment in the game so far?

Without question, my favorite gameplay moments are the big jumps and the more rally-like moments. When you slide at 250kph in a futuristic ship on a dirt track between rocks, it’s an awesome sensation.

Why did you choose to go the Early Access route?

I chose Early Access because I think that the community can bring a lot of positive things to the game, whether it's new ideas and suggestions or to discover issues more quickly. As I’m the only one developing the game, I think that the community can really help me during the process of creation. It also helps me learn if the game appeals to the public and what features players want to see in it. 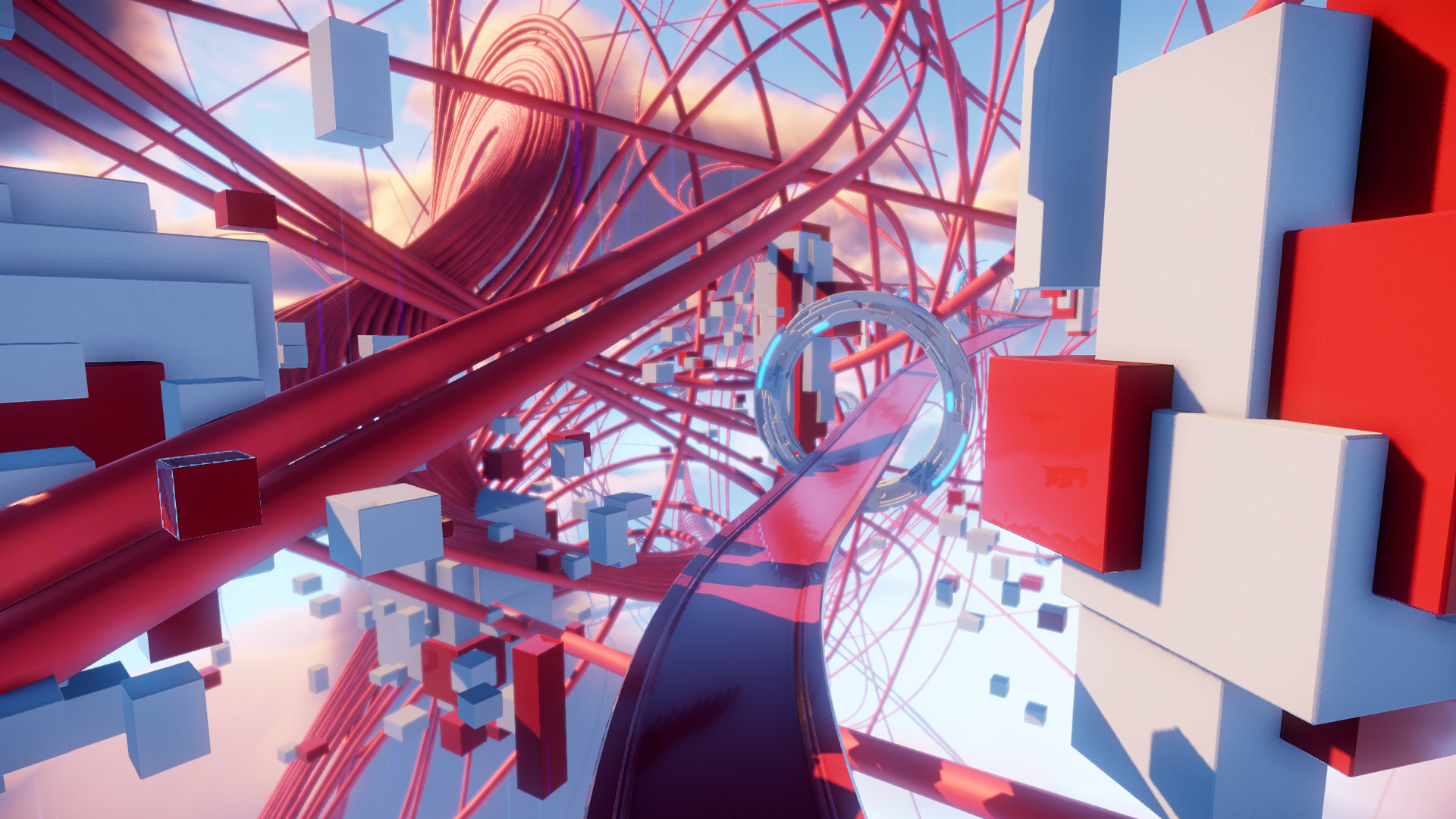 How long have you been working with CRYENGINE?

I've been working with CRYENGINE for a long time. I started creating maps on Crysis sandbox, then mods, and then the game Rolling Sun. I would say that I started ten years ago, more or less.

The vehicle system is powerful and the physics too. These are the essential components of my game so the CRYENGINE is perfect for this project. I’ve been working with the engine a long time, and it’s never disappointed me! 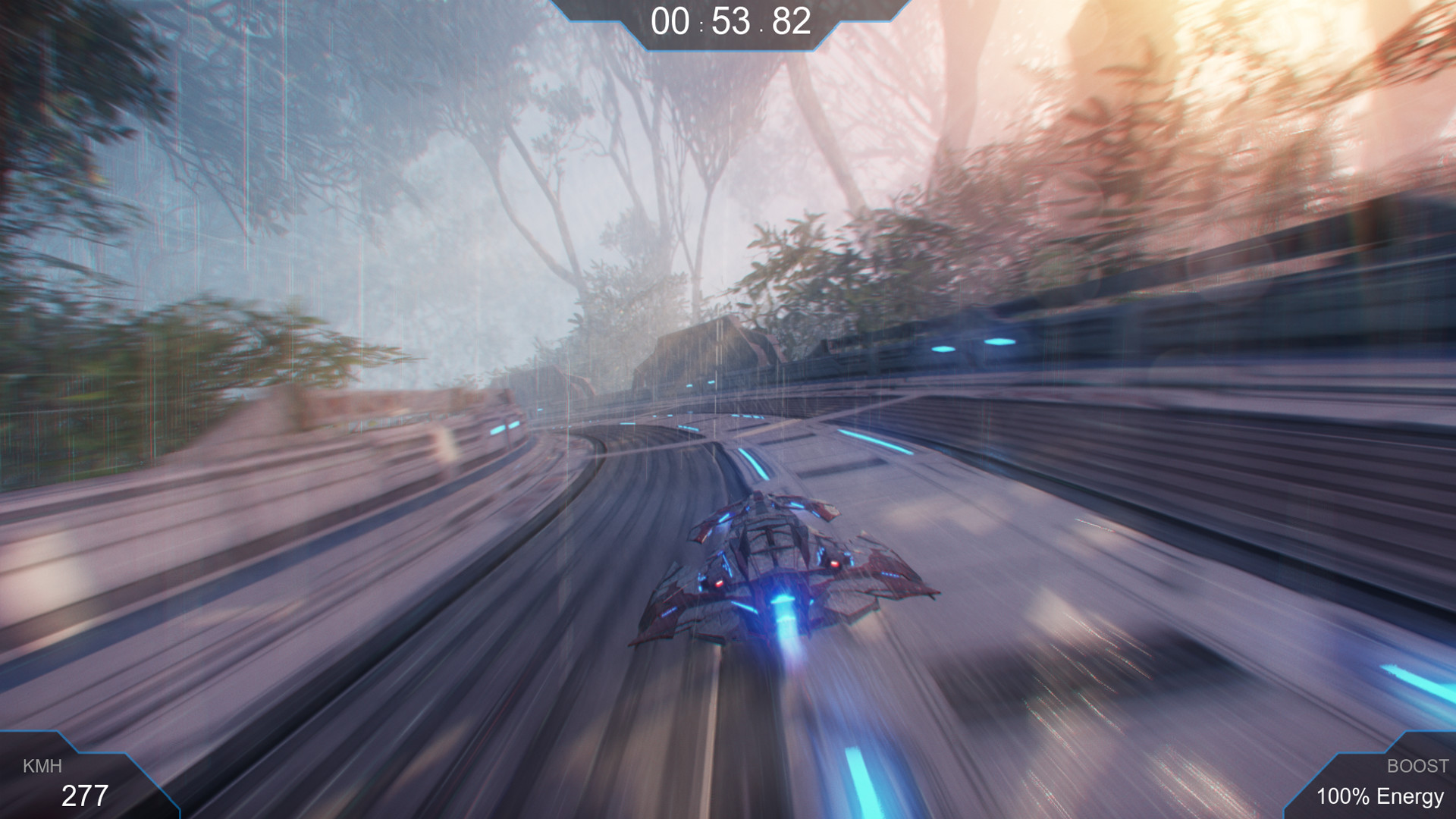 Oh, without doubt it’s the vehicle system and Flow Graph. It’s very powerful and allows me to create the exact vehicles which are perfect for my vision. I would also add the Time of Day feature which is an excellent tool for the visuals and the weather.

What are the next steps for the game?

The next big step for the game is the addition of a "speeder" type vehicle. This will be a very mobile vehicle that can excel on small roads, a bit like a hovercraft motorcycle, which will give an off-road look to the game. I’ll also be adding many new circuits, a stats system, and new game modes which are all on the list of upcoming updates. 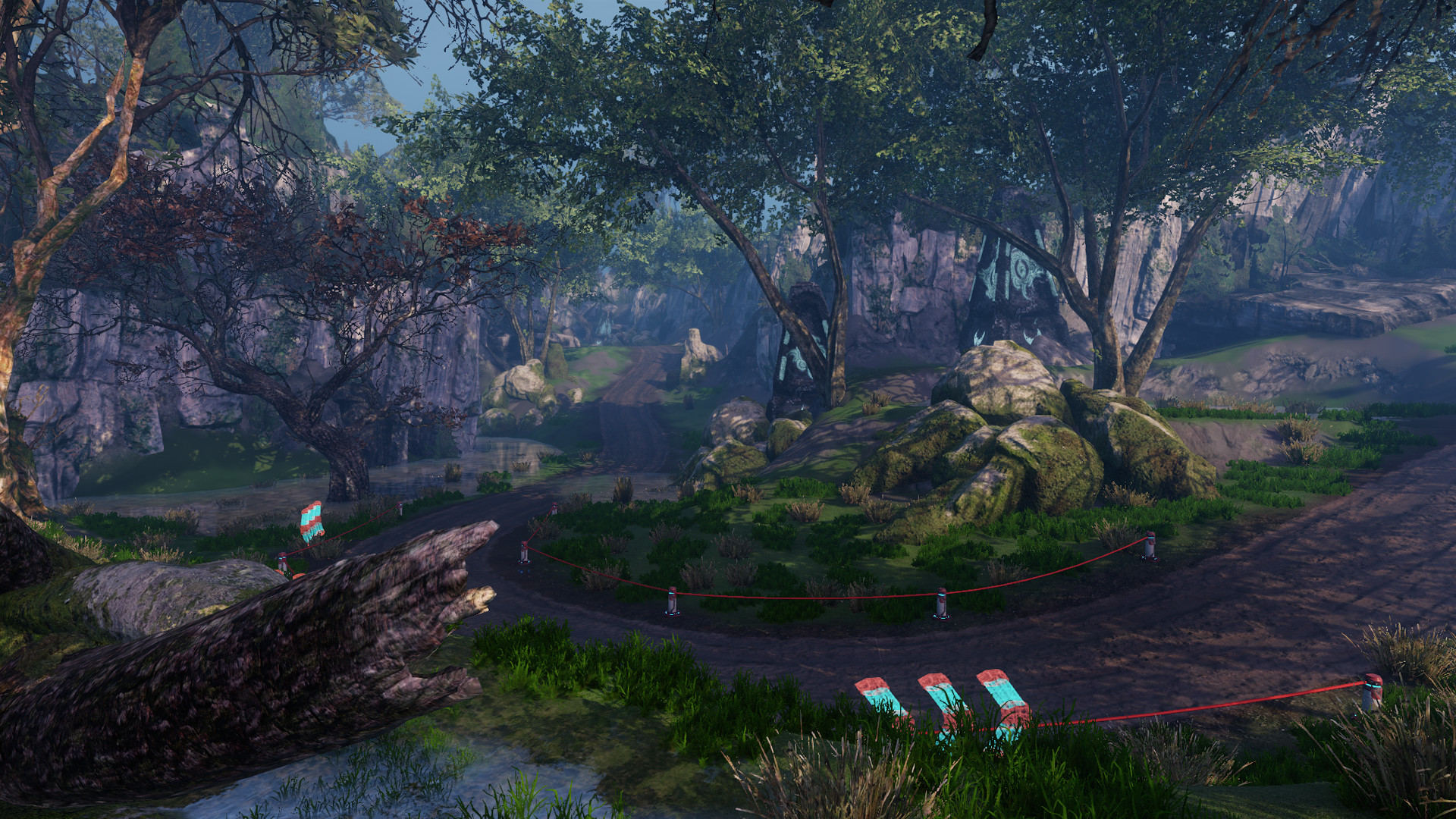 What’s the best way to stay in touch with Racing Glider?

I have a large and growing fan base on the community hub on Steam, where I’m very active and the players use it as a forum. Of course, we’re also on Facebook, Twitter and you can check out the Racing Glider website. I’m also active in the CRYENGINE community, and you’re welcome to contact me in all these ways. But the best way to keep in touch with Racing Glider will remain the Steam community.

Are you on a solo mission to make something cool with CRYEGINE or feeling inspired to get started now? Don't forget to check out the Humble CRYENGINE Bundle 2018 for a load of assets, tutorials, samples and inspiring games and make sure we know about it by getting in touch in the comments below, or on the CRYENGINE official forums, Facebook, and Twitter.

Thank you EndiHaxhi ! And thanks to Cytek ! :)

Reply
1
2
View all
More like this
Hunt: Showdown x Marvelous Designer Fan Art Contest highlights
Our Hunt: Showdown 3D Apparel Creation Contest, hosted by Marvelous Designer, is still open for entries. Get advice from two of our community experts!
August 26, 2020
1
Teaching game development to kids with CRYENGINE
We speak to Omar Ocasio from the CRYENGINE community, about his rewarding experience teaching kids game development with our engine.
August 07, 2020
1
Stay home & keep developing
Flatten the curve, stay indoors, and make some games. Check out a range of free resources and advice for game development at home.
March 31, 2020
6
Privacy preferences