In the Beginning Was the Word 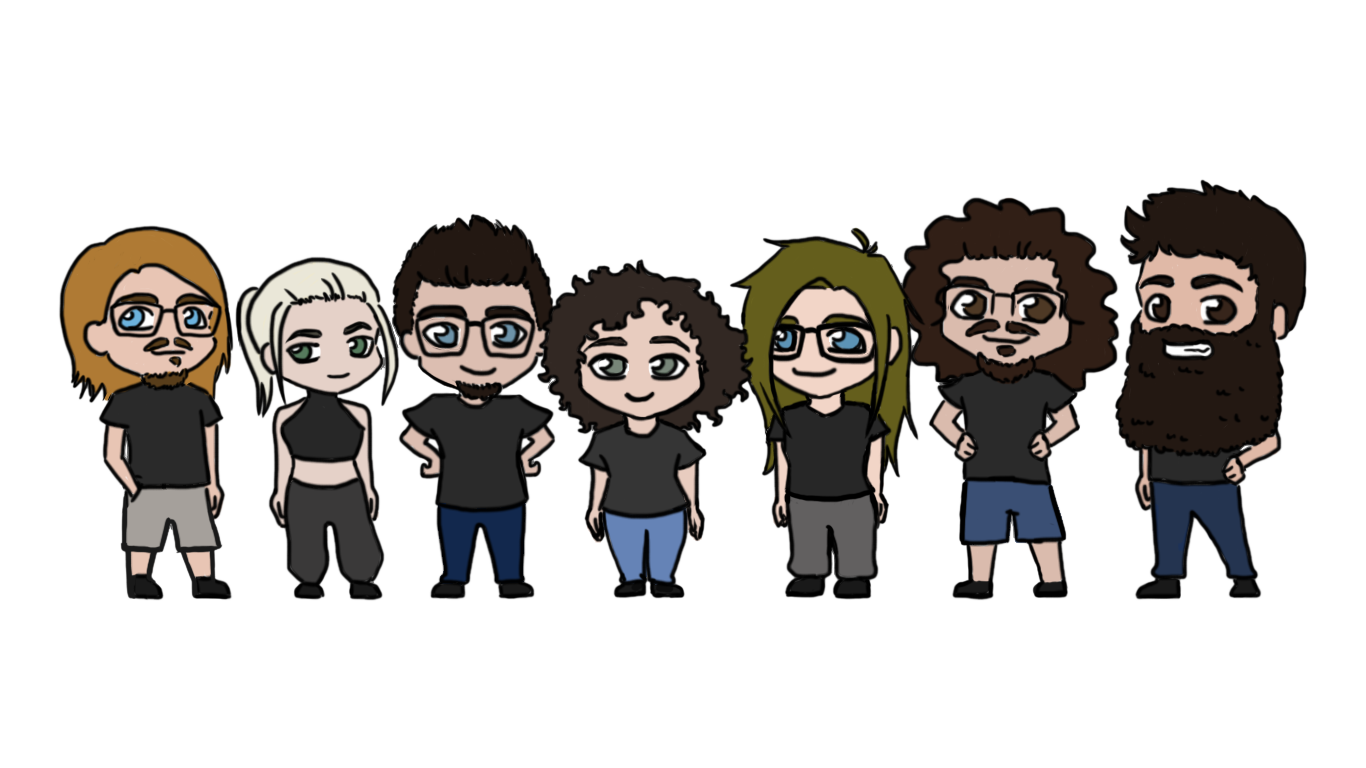 In the Beginning Was the Word is a pay-what-you-want VR game for Oculus Rift created by Servants of the Serpent, a team of seven students from The Darmstadt University of Applied Sciences. The game was made in just five weeks, and the team was invited to present the project at Crytek’s HQ in Frankfurt. In the game you play the role of an author who must explore a magical forest on a quest to clear their writer’s block. You can shape the world around you, grow trees in the blink of an eye, make it rain at will, and destroy huge boulders as you solve a range of puzzles in this beautiful and immersive adventure.

Thanks for joining us! Where did the idea for the game come from?

Fabian: Each semester, we get a specific topic for a project, and the theme for this game was "nobody is perfect." Each of us had to come up with three pitches, and along with a few others, I had the idea of an author who is struggling with writer’s block. Writing is one of my hobbies, so I’m aware of this struggle, and I also fancied the idea of exploring this through an imaginary world.


The game world was inspired by James Cameron’s Avatar, which always really fascinates me. 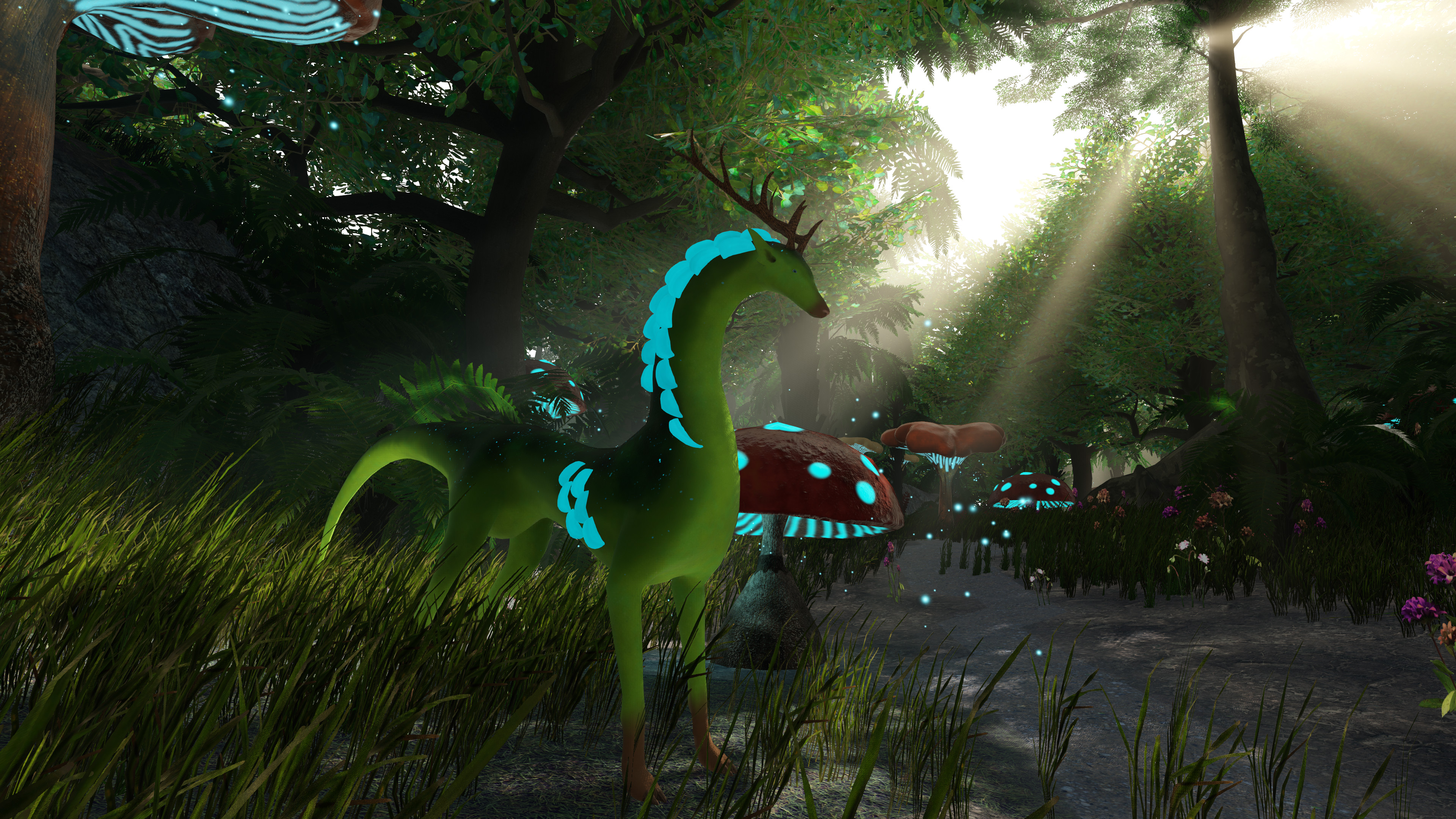 What did you want to achieve with the game?

Michael: We wanted to create an immersive VR puzzle game, and learn to use a new engine. Everyone from the team was used to working with Unity, and we wanted to try out CRYENGINE instead.

Judith: In the beginning, we thought learning to work with a new engine and several other tools would be challenging enough, so we never expected the outcome to be what it is now!

Fabian: I wanted to create a fantasy world filled with nature that would capture attention and spark the imagination. VR is a great tool to achieve a high level of immersion, and CRYENGINE’s amazing nature rendering capabilities convinced me that it was a good idea to use the engine. Once that was clear, I wanted to demonstrate that even a student team with a limited timeframe could achieve something great with CRYENGINE and show how the engine could be used for VR projects by indie developers.

Elfi: I wanted to make an immersive VR experience, which is believable and draws the player into the game. I also wanted to gain some experience with VR, as I had never worked with it before. From a game design perspective, I wanted the player to understand what they need to do and where to go and create puzzles that deliver a sense of achievement and joy when completed.

Lucca: Last year I had an internship at Crytek, where I experienced professional game audio production for the first time, and I wanted to apply some of what I learned in the development of this game. 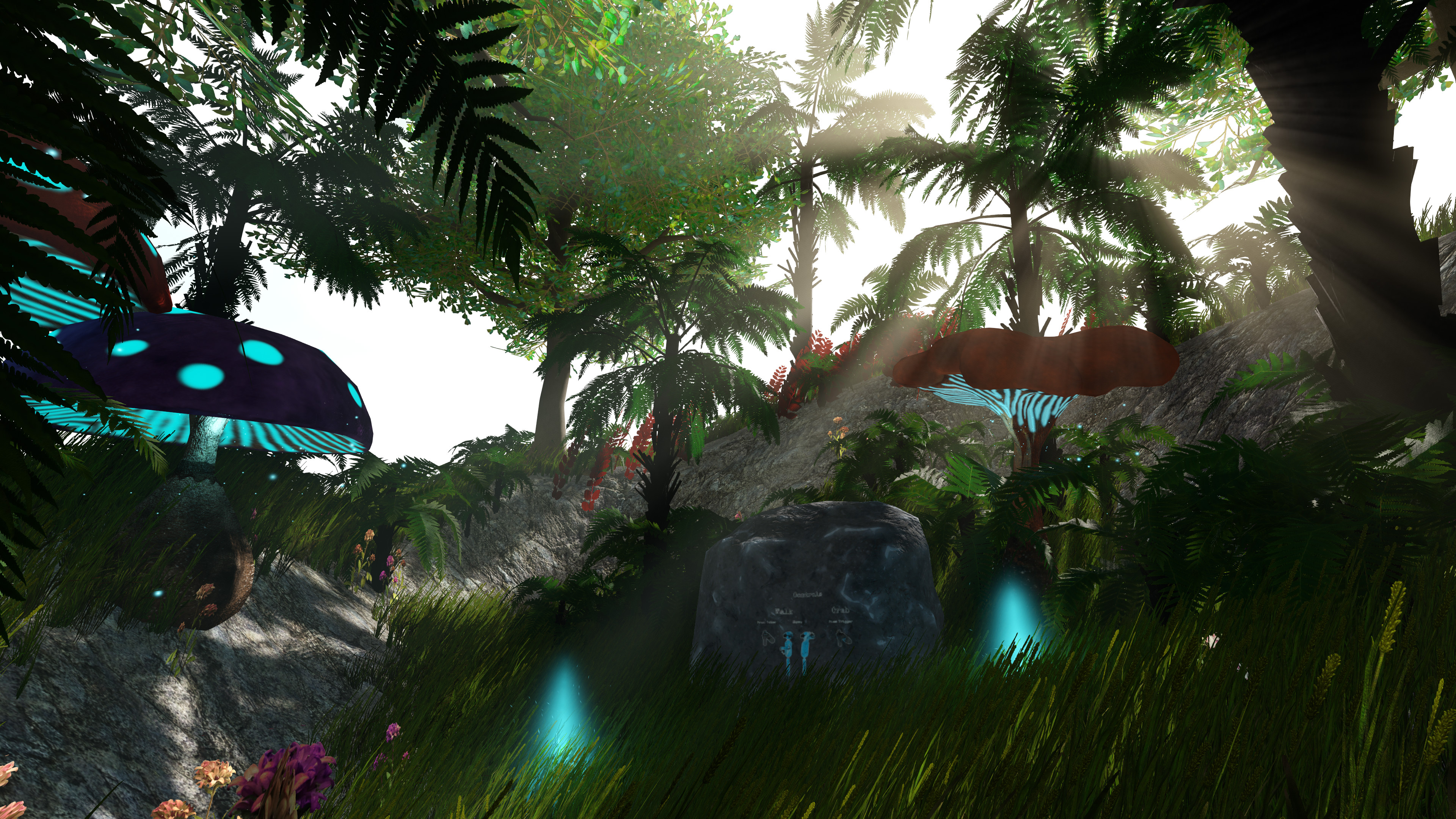 How did you find the development process, and how pleased are you with the progress you made?

Lucca: What surprised me the most was how well the whole team adapted to a new engine. None of them had ever worked with it before, and everyone delivered exceptionally well within those five weeks of production, creating a vertical game slice with huge potential.

Fabian: Coming from Unity, I was used to endless light baking sessions, which CRYENGINE does not require. Furthermore, I was surprised that all the volumetrics (light shafts, fog, clouds) just worked in VR with very little performance impact.

In the end, I am very pleased with the result. It looks amazing, especially the vegetation, which was very important to me. Even though we developed the game in less than two months, it has about 30 mins of playtime, and most people seem to really enjoy it.

Sarah: The look of the game, or rather the engine, is amazing. I am very pleased with that. Time was a real constraint for us, and I would have liked to have more animals and movement in the forest, with AI reacting to the players. However, in a short timeframe, we had to make sure we finished with a playable game, so we had to choose our priorities.

Michael: I am very pleased with what we achieved. Considering that we were new to the engine and had such a short time, we still managed to develop an almost bug-free game with a working game loop.

Judith: The process of putting together a game wasn't as difficult as expected, but we are still surprised with what we achieved. We thought that the game would be very prototype-y, but we made so much progress in the last two weeks that we uploaded the game to itch.io, something we never imagined we would do when we started out.

Elfi: I am very pleased with the result. In the last two weeks, the game became much more polished, and we are all proud of it. The huge support and appreciation for the game from Crytek was surprising for me, and I am very happy about that. It felt really good to hear from people within the industry that our project is awesome, especially given the time limit we had to make it.

Harry: If we had more time, I would have chosen RTPC (Real-Time Parameter Controls) to trigger the music. This provides a more interactive feeling, and the player feels more integrated into the world. Every action changes the music in different ways (instruments, melody, harmony, tempo,) and we could have designed it around different themes, for example, a calm and relaxing composition for the forest, and a faster, more adventurous and playful theme for puzzles. 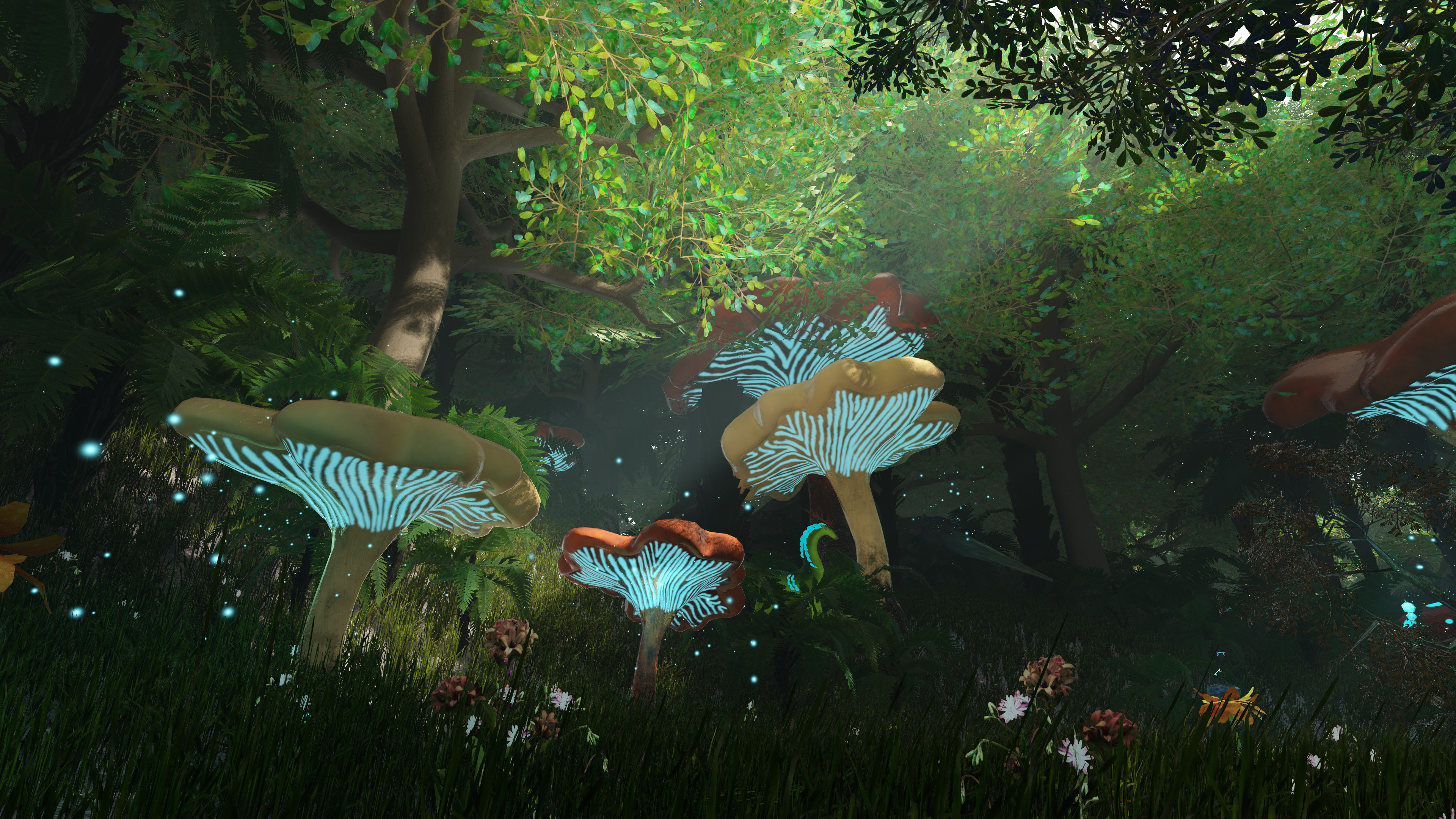 What CRYENGINE features helped you?

Fabian: Probably the most helpful tool for our game was the Vegetation Editor. It allowed for a very dynamic environment, in the sense that there was a lot of movement from detail bending, even though we did not have a lot of animated assets. I was also very pleased with the Wwise integration with the engine, which was easy to set up and use.

The pfx2 particle system was very important for the final feel of our game. The editor itself was an absolute blast to use, and the game looks very good.

Lucca: Thanks to the Audio Controls Editor, and the wonderfully implemented support of Wwise and the Oculus Spatializer in the engine (shout-out to the Audio Programming Team!) adding audio into the project worked like a charm.

Judith: Our game is set in a forest, so the Vegetation Editor was very helpful. Placing vegetation with an extensive amount of variation was very easy, and I've never seen such a tool in other engines.

Harry: We wanted to integrate adaptive, interactive music, so I used Wwise to achieve this. Depending on the player’s state in the game, for example, exploring or solving a puzzle, the music changes. To provide seamless transitions, the music was composed so that compositions have a different melody, harmony, or tempo, but are in a similar key so they can blend into each other. 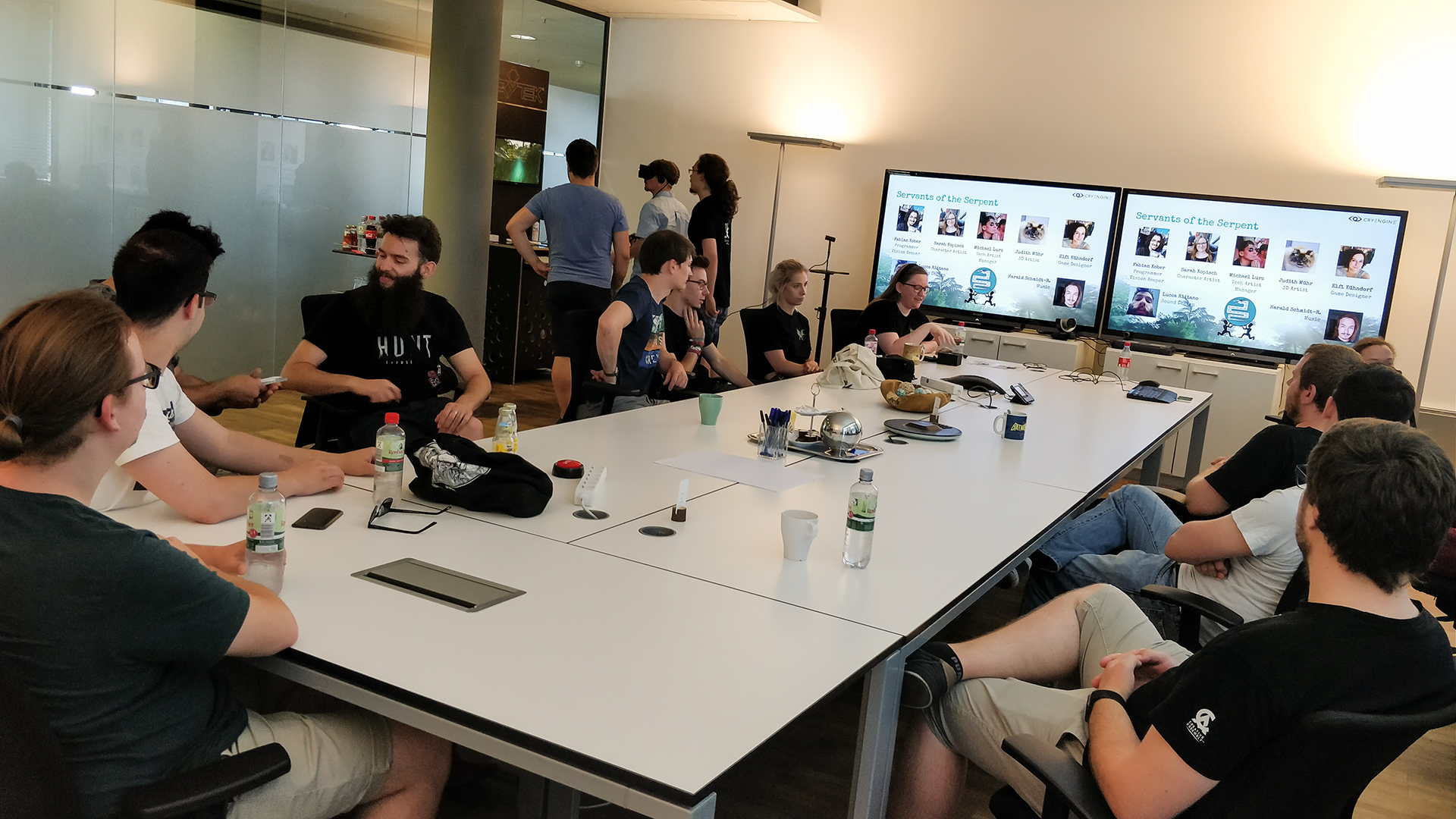 How was your experience visiting Crytek?

Fabian: It was amazing. Everyone was incredibly nice, and we got a lot of positive feedback about our game. Also, everyone was interested in our experiences with the engine, and our feedback felt very well received. We picked up some good game design tips, and we also heard a lot about CRYENGINE 5.6!

Elfi: It was awesome. It was my first time at Crytek, and it was very interesting to see how the different departments work together. I felt very welcome and appreciated. It was a great feeling to be able to present our game in front of Crytek staff, and we received a lot of positive and helpful feedback from the team. It was nice to speak with people who have a lot more work experience than we have, and I picked up many interesting insights about the industry and how to break in.

Michael: It was great to receive so much positive feedback from the Crytek team. Many people were surprised to see what we had achieved in just five weeks of production time. We received feedback about how to improve the game and tips on what to put in our application when we apply for a position at Crytek.

Lucca: Visiting Crytek to present the game was a wonderful experience, and I'm more than pleased with the feedback the team received. The real interest that was shown from Crytekkers for such a small student project was overwhelming.

Judith: The office is great. Everyone was very friendly and interested in our project!

Sarah: It was amazing! The working atmosphere seemed perfect, and everyone was so open and helpful. You have amazing and super-friendly people there. It was such a pleasure to talk to them. 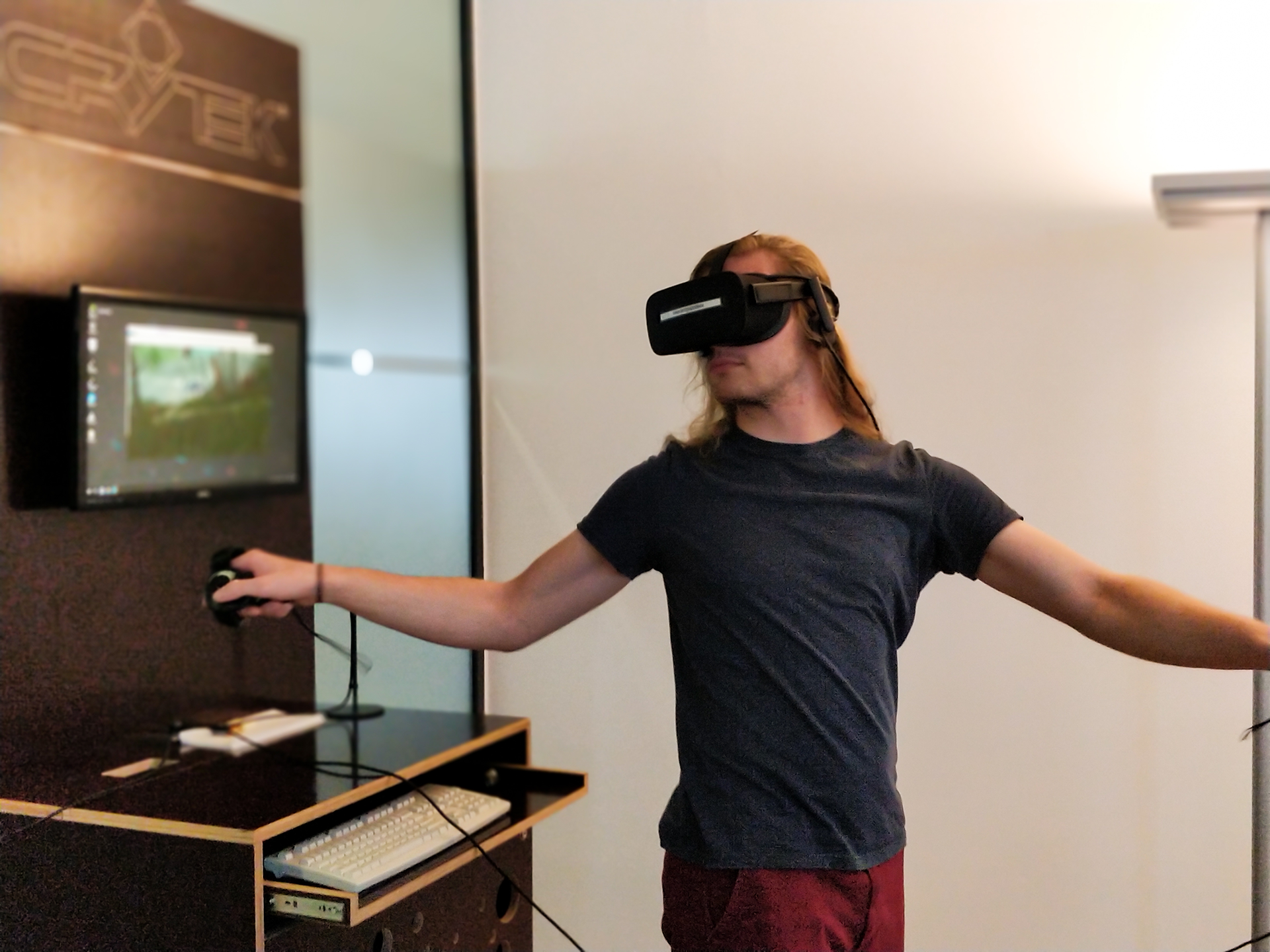 What's your goal for after graduation?

Fabian: After graduation, I want to start working, preferably at a game studio. I would love to work at Crytek!

Sarah: My goal is to find a role as an animator in a gaming company. I want to be part of an amazing team and contribute my best to a stunning gaming experience, grow my skills, and be able to make fiction seem like reality.

Lucca: I'm going to move to Austria and do a master’s degree. I would like to work on sound for a AAA game production from start to finish in the future.

Judith: I would love to work for an established company like Crytek to learn from experienced artists and improve my skills.

Harry: After graduation, I will continue working on small projects, producing music for games, films, and bands. In 2020 I’m going to start a master’s degree focusing on audio.

Elfi: My goal is to follow my passion and work in the game design area. I’d like to travel too, and I am also thinking about doing a master’s degree, but I have not decided where yet.

We’re sure you’ll agree that the team did a fantastic job with the project, which you can check out on itch.io. If you’re making something cool with CRYENGINE, let us know on the forum, or via Facebook and Twitter, or join the community and our CRYENGINE development team over on our official CRYENGINE Discord channel. If you find a bug in the engine, please report it directly on GitHub which helps us to process the issue quickly and efficiently.